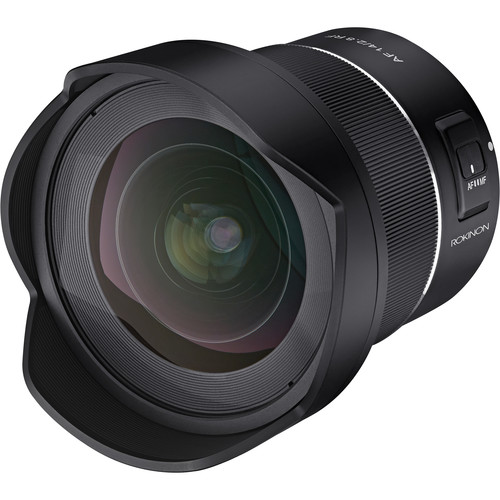 The World’s First AF 14mm F2.8 for RF mount
Samyang launched the first manual focus lenses for RF mount, MF 14mm F2.8 and MF 85mm F1.4 in last February to meet consumer demand for more lenses for Canon mirrorless RF cameras and now the new AF lens follows its steps. Samyang Optics, which first introduced autofocus lenses starting with the Sony FE mount in 2016, has taken the title of the world’s first lens release in just three years, becoming one of the world’s leading company in the global lens industry. In 2018, Samyang also launched the autofocus lenses for Canon EF mount and Nikon F mount, and the new RF lens is added to the line-up as the Canon RF mirrorless camera market grows.

Light and Compact Mirrorless AF Lens
RF camera users have to put an RF adapter on their Canon EF lens to enjoy a 14mm angle, at a size and weight that would not ideal for a mirrorless camera. The new Samyang AF 14mm F2.8 RF is designed exclusively to prioritize the user experience of mirrorless cameras. As a result, the length of the flange back was reduced and so the length and weight of the lens were also lowered to maximize the usability of users. It also minimizes the weight of the focusing lens for fast and accurate AF performance.

User-oriented Lens Device Design
The new lens is equipped with a switch that allows easy changing between AF and MF when manual focus is required or for fine adjustments. Dust and moisture resistant weather sealing ensures a more secure experience under the outside environment. There is also a rear filter holder on the mount to create more diverse images.

Globally Available in November
The Samyang AF 14mm F2.8 RF lens will be available worldwide in November. More detailed information about the product can be found on the official Samyang Optics website and social channels.