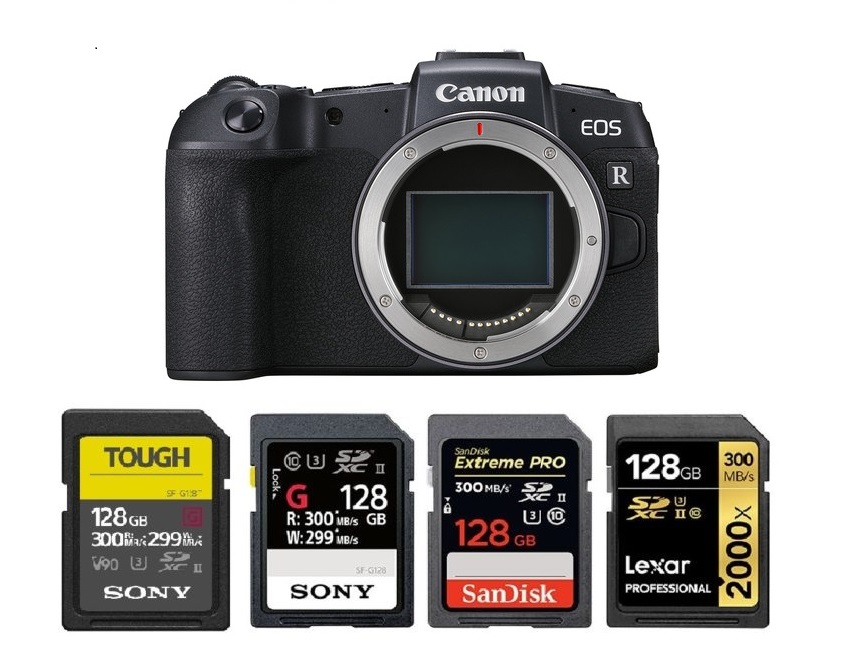 The new Canon EOS RP (B&H, Adorama, Amazon) mirrorless camera is the lightest and most compact full-frame EOS camera to date and the cheapest 4K full frame camera from Canon. Just like its brother Canon EOS R, the Canon EOS RP comes with a single sd card slot that supports UHS-II SD cards and also works with UHS-I and standard SD cards. In addition, the Canon EOS RP supports UHD 4K (3840 x 2160) resolution recording at up to 23.98 fps at 120 Mb/s, along with Full HD 1080p and HD 720p at 60 fps for slow motion playback. So, if you would like to shoot Raw still images and 4K video with the Canon EOS RP, you’d better to choose some quality 128GB and 256GB card options, and the best choice is the UHS-II memory cards with the fastest write speeds and read speeds.

Want the fastest UHS-II SD cards with a V90 rating? The toughest and fastest SD cards are the Sony SF-G Tough Series UHS-II Memory Cards – offering maximum read speeds of up to 300 MB/s and maximum write speeds of up to 299 MB/s – Thanks to its V90 speed class rating, minimum write speeds are guaranteed not to drop below 90 MB/s. In addition, the Kingston Canvas React Plus UHS-II SD Card is another great choice and great value SD card for shooting 8K, 4K, and Full HD video, as well as high-resolution photos. Besides, the ProGrade Digital UHS-II SDXC Card (V90) and the Delkin Devices Power UHS-II SDXC Card (V90) are two of the most popular SD cards with an affordable price on the market!

The Canon EOS RP can also work with the UHS-I SD cards, but it will be limited by the write speed of the memory card and the buffer may cause shooting to slow down. The fastest UHS-I SD memory cards are: SanDisk Extreme PRO UHS-I SDXC Memory Card (V30) and Kingston Canvas Go! Plus UHS-I SD Card – Both the two memory cards allow you to continue shooting images and videos without running out of storage capacity (up to 170 MB/s read speed and 90 MB/s write speed).

The Canon EOS RP will start shipping on February 27 at B&H, Adorama, Amazon. Hope our best memory card list can help you! Enjoy your shooting!