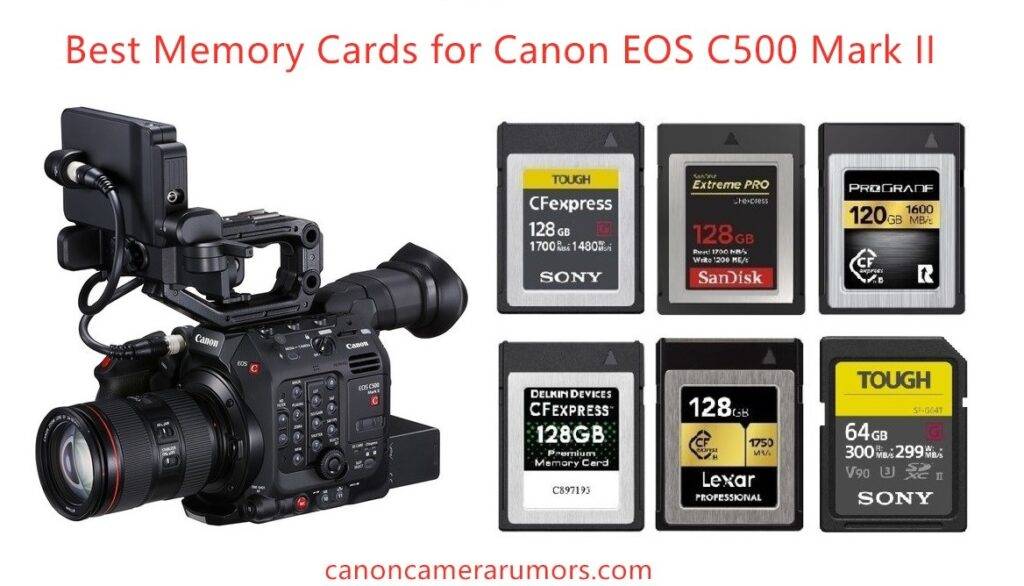 The Canon EOS C500 Mark II has 2x CFexpress (Type B) card slots. The CFexpress card (Type B) is currently the fastest and the most capable memory card format on the market. Sony, Delkin Devices, SanDisk, ProGrade Digital, Lexar and others have already released their CFexpress memory cards. Offering fast read speeds up to 1700 MB/s along with write speeds up to 1480 MB/s, the Sony TOUGH CFexpress Type B Memory Card is one of fastest memory cards around, and it is ideal for recording a variety of video resolutions, bit-rates, and compressions, as well as uncompressed continuous RAW shooting of fast-moving action such as motorsports and wildlife. You can also see the full list of our top recommended CFexpress cards for Canon EOS C500 Mark II below – any of these make for a good choice. Overall, we highly recommend the Sony TOUGH CFexpress as the top best CFexpress cards for most people.

The Canon EOS C500 Mark II has one UHS-II-compatible SD card slot. Offering maximum read speeds of up to 300 MB/s and maximum write speeds of up to 299 MB/s, the Sony SF-G Tough Series UHS-II SD card is currently the world’s fastest SD card on the market, and it is well-suited for video capture, including 8K, 4K XAVC S, 60p AVCHD, 3D, HFR, and Full HD video, as well as super fast continuous shooting. In addition, Kingston, Lexar, SanDisk, ProGrade Digital, Delkin Devices also released their super fast UHS-II SD cards, which are excellent choices for Canon EOS C500 Mark II cinema camera. You can just choose the one you like!